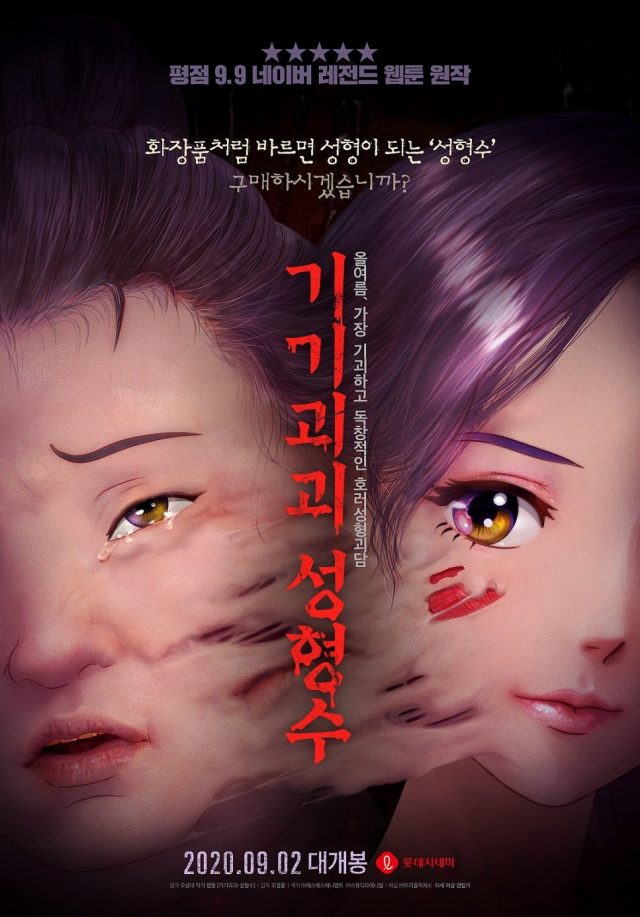 Most of us were raised to say, at least in polite company, that we believe looks are not as important as what’s „on the inside”, a person’s soul and mind. But most of us also know that this nice sentiment is naive at best, and at worst straight-up hypocritical: there have even been studies showing that good-looking people are favoured everywhere in society.

In the cynical Korean anime „Beauty Water”, looks are simultaneously the most important thing in the world and completely irrelevant. The beauty-based hierarchy of its universe is very rigid, an extreme version of the real-life one. But deep inside, almost everyone in it, regardless of looks, is equally ugly. Beautiful people are cruel, arrogant bullies; unattractive people are bitter, entitled and vengeful.

The titular Beauty Water is a product that melts skin and flesh, allowing the user to literally remodel their entire face and body into a more conventionally attractive appearance. Its aggressive marketing draws in Yaeji, an overweight make-up artist who releases her pent-up anger against pretty women through a mean online troll persona. Yaeji believes all her life’s problems will be over once she’s managed to transform herself physically, but she is, of course, unaware that she is the protagonist of a cautionary tale.

As far as cautionary tales go, „Beauty Water” is not a subtle one: things go south very quickly, in predictably grisly ways; many characters are one-note, crazed maniacs without any nuance in their personalities. The film is almost hilarious in its insanity, with over the top developments and twists everywhere, accompanied by melodramatic horror-movie music. Yet it can’t be denied that some of the social critique feels truthful if not particularly deep.

As an overweight, unattractive woman, Yaeji is marginalised, teased or simply treated as invisible. After she becomes the gorgeous Instagram influencer „Sulhye”, she is admired but also objectified and exploited. Women simply can’t win, and Yaeji herself perpetuates the same system of „look-ism” that made her suffer.

It’s hard to care too much about the misfortunes of our heroine, though, since she is such a thoroughly unpleasant person, entitled, vapid and endlessly abusive towards her kind parents. Watching her get her comeuppance turns out to be quite satisfying, like an extended Tales from the Crypt episode directed by a David Cronenberg-wannabe.

The animation has the look of a cel-shaded video game; it doesn’t look great, but it fits in with the B-movie quality of the narrative. Come for the moral lessons, stay for the violence, nudity and melting flesh.

I watched Beauty Water via Leeds International Film Festival Online; the film is still available to UK-based viewers as an on-demand rental until 30 November.