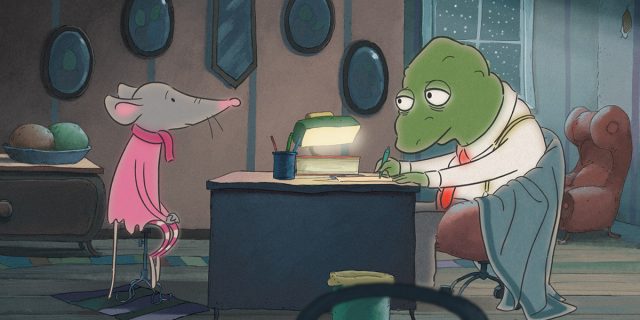 An experienced detective, a bit rusty, set in his ways and eyeing retirement, is trying to solve a mysterious crime in a small community. His assistant is an overly eager newcomer to the job, trying to prove her worth. The only witness in the case is a bit eccentric to say the least, and the main suspect is a loner feared by everyone. Oh, and the crime was committed on a snowy day.

The above description could fit a number of gritty detective movies and TV series, Scandinavian or otherwise, all of them full of murders, traumas and other such gruesome things. The Swedish animated film „Gordon and Paddy„, however, takes the cliches of popular cop thrillers, gently mocks them and applies them to a warm-hearted story for young children.

Gordon, the old detective in question, is a kind toad who is extremely fond of biscuits and whose police work consists mainly of stamping paperwork. Paddy, a little mouse, is helping him investigate the disappearance of some nuts belonging to a wacky squirrel. „The Killing” this is not, although who knows, for the kids watching it may be the first step towards becoming genre fiction aficionados. What it is: a sweet story about friendship, and more specifically about how friends do things better together than on their own.

„Gordon and Paddy” is based on a series of children’s books, and indeed it looks and feels a lot like a children’s book, slow-paced and hand-drawn in soft colours. It’s visibly low-budget, but it uses its limitations well, and while it is unashamedly a film for small kids, a bit too predictable and optimistic at all times, I’m sure parents who’ve had enough of manic chase scenes from other family movies will find its quiet mood very refreshing, too.

In any case, everyone in the audience during the film’s UK premiere at the BFI Festival seemed to like it, even though a little girl got a bit too emotional during a scene depicting Gordon’s retirement. I suppose it’s a compliment to how likable and endearing the character is, as voiced by international film star Stellan Skarsgard (even director Linda Hamback declared him her favourite.) Meanwhile, Melinda Kinnaman/Paddy gives a charming performance as a little mouse who starts out as meek and lost, but gradually gains confidence and finds her place in the world.

It’s a shame that this kind of low-key European animated films are destined to be seen so little outside their own countries or one-off film festival screenings. „Gordon and Paddy” has my stamp of approval, so I hope it will pop up on some streaming service at some point, so that more children get to enjoy it.