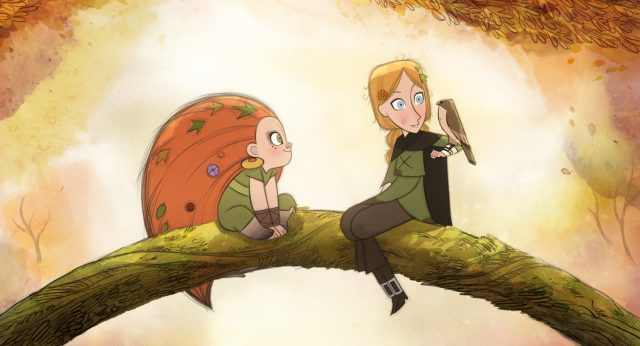 In Cartoon Saloon’s latest animated feature „Wolfwalkers„, human settlements are grey and cramped, made of sharp angles, straight lines and harsh geometrical structures. The forests that surround them, meanwhile, are drawn in flowing organic shapes, warm autumnal colours and soft pencil strokes. Society (the film seems to say) is constricting, a cage that demands conformism and order. Nature, on the other hand, is all vibrant, beautiful chaos.

In both visuals and narrative, „Wolfwalkers” is built around the conflict between nature and the human desire to tame it and invade its territory, but that is just one of the dualities that emerge. The film takes place in 17th century Kilkenny, during Oliver Cromwell’s colonisation of Ireland, with Cromwell himself appearing as the film’s main villain. Cromwell is obsessed with exterminating wolves from the woods around the town, and annoyed by local beliefs that some of the wolves are shape-shifting humans. So: it’s civilisation versus wilderness, obedience vs freedom, colonisers vs colonised, mythology versus modernity, English vs Irish. Our protagonist is English girl Robyn (voiced by Honor Kneafsey), who lives in Kilkenny with her father Bill (Sean Bean), a hunter employed by Cromwell to take care of the wolf problem. Bill forbids Robyn from stepping foot outside their home, worried of the dangers posed to her by the wild creatures beyond the city’s walls but also, perhaps, by the local population, who are understandably hostile to the English invaders. Robyn, however, feels suffocated by these restrictions, and ventures into the woods, where she meets and befriends Mebh (Eva Whittaker), a free-spirited child with a magical secret. Together, Robyn and Mebh conspire to save the forest and its wolves.

Another thematic conflict of importance comes up, then: the clash between being protected by others and carving your own path, deciding by yourself what’s good for you. The antagonist, after all, is a self-styled Lord Protector, who isn’t concerned with asking whether his „protection” is needed or beneficial. Robyn’s father is genuinely well-intentioned, but he doesn’t understand that he is sometimes hurting Robyn by not allowing her to take any risks whatsoever. In fairy tales, children who overstep boundaries are usually punished harshly (see: Red Riding Hood); „Wolfwalkers”, on the other hand, celebrates independence and dissent. The friendship between Robyn and Mebh is the story’s emotional centre, and Mebh is an extremely charming character, an amazing creation, perhaps one of the best I’ve seen in an animated film in a long time. Every time the little wild girl is on screen, the film comes alive with more colour and light than before.

The script does sometimes drag – mostly in its action scenes, which are a bit too Hollywoodian – but it’s only a quibble: just like „The Secret of Kells” and „Song of the Sea”, „Wolwalkers” draws from Irish mythology and history to shape it into a child-friendly film that treats its viewers of any age with respect for their intelligence, and in this case adds a splash of environmentalist message for good measure.

Most of all, though, „Wolfwalkers” is beautiful to look at. I know I’m not the first to comment on the film’s exquisite visuals and I definitely won’t be the last either. The background paintings are gorgeous, the character designs are simultaneously expressive and simple, and I liked most how the artists don’t shy from showing visible pencil or brush work, a rare treat of texture and warmth in our days of identical CGI animation that looks like shiny plastic toys. A particular highlight is the film’s depiction of „wolf-vision”, enhanced wolf senses from the wolf’s own perspective. „Wolfwalkers” is not to be missed when it comes out on Apple TV in December; I watched it as part of BFI London Film Festival 2020 online.