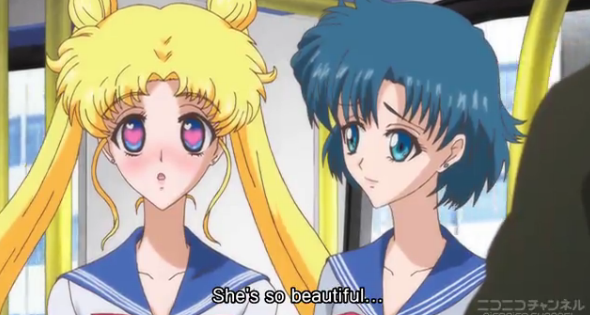 „Act 3: Sailor Mars” is the first episode of Sailor Moon Crystal when I felt entirely on board with this new series. I’m increasingly linking the more „mature”, serious tone. The introduction of Sailor Mars did a good job at balancing characterisation and plot and also had a few humourous touches here and there, achieved without exaggerated cartoony faces. Yes, it’s clear, it’s a different „Sailor Moon” from the one we grew up with, but I’m interested in what it has to offer.

Just like in the manga, the introduction of the third Sailor Senshi, Mars/Hino Rei, is chapter 3; in the old anime, it was episode 10. This is not the only difference between the two cartoon series: in the 1992 version, the plot of the episode, although keeping the major idea (a magical evil bus is said to be kidnapping people every day at 6 pm), it deviated a lot, adding more screen time for villain Jedaite, complicating and convoluting things to the point where they didn’t make much sense, adding annoying amounts of comic relief (most notably, Rei’s grandfather as a pervert leering at young, attractive people of both genders, including Jedaite), inserting Tuxedo Mask where he didn’t need to be and giving Rei a much more unpleasant personality. Yes, the old anime episode introducing Sailor Mars was kind of a mess, frankly, which is maybe why this new take on it shines in comparison.

Sailor Moon Crystal stays close to the manga, and places the focus firmly on Rei and her perspective. Just like Sailor Mercury/Ami before her, Mars/Rei, a shrine maiden in a temple, is also a social outcast, for different reasons: she has psychic powers which isolate her from other people, who are all a bit afraid of her, but at the same time, also awfully demanding, asking her to use her abilities to trace children that have gone missing in the cursed 6 pm bus, and blaming her as unwilling when she confesses the limits of her powers. The writers do a good job of helping us sympathise with Rei’s position while acknowledging that she is unmistakably „different”. She is also unattainably beautiful, to the point where other girls, i.e. Usagi, will stare at her and follow her on the street.

A side note on that, since Usagi was also fawning over Ami’s cuteness and intelligence in the previous episode. While the franchise has a confirmed lesbian relationship (Sailor Uranus and Sailor Neptune, who will most likely not appear in „Crystal”), it also has, in all of its incarnations, various other instances of girls crushing on each other. This is the kind of thing that would have been edited out as „sinful propaganda of homosexuality” in the uptight Western dubs that mistook Sailor Moon for a kiddie show. I think it’s super important for people who are encountering this side of the series for the first time to learn to embrace it, for two main reasons: first of all, there’s obviously nothing wrong with diverse sexuality in a series targeted at teens, the age when people define their identities, and a lot of „Sailor Moon” characters have interesting, fluid identities and preferences. But secondly, it’s also worth mentioning that this is not necessarily a sexual thing. Pop culture usually portrays women as mean, jealous and catty with each other, constantly judging and tearing each other apart, so it may seem strange to see the girls in „Sailor Moon” in awe of each other, admiring each other’s beauty, brains and talents and looking up to each other, but I feel qualified (as, you know, a woman) to assure you that this does happen in real life.

Anyway, back to the episode. Usagi-in-stalker-mode develops an obsession with Rei, and one day, while following her around, sees her being kidnapped in the magical evil bus driven by Jedaite himself. Promptly, she transforms into a….flight attendant. „Why did you turn into a flight attendant?” asks a puzzled Luna the Cat. „Because it’s my job to ensure passenger safety!” cries Usagi while boarding the cursed bus. (I hope Usagi’s disguises will continue to be featured, because they are a priceless source of funny moments.) Just before she does that, she throws Luna at Tuxedo Mask, who happens to be there for some reason- catching the cat is his only contribution to this episode. Jadeite takes the evil bus into an alternate evil dimension, where he is keeping the bus passengers as hostages to lure the Sailor fighters. Ami teleports there as well, and they both transform right in front of Jedaite (secret identities, girls? hello?), but he overpowers them, so it’s time for Rei to reveal that she is no ordinary human, in more than one way- and to join the team and save day the as the new Sailor Mars.

So yeah, maybe I liked this episode so much because it focuses on Rei, who is a shrine maiden with two pet crows and psychic abilities, what more can you ask of a character? But it’s not just that: the general mood was well done, and the bus story somehow seemed less silly and more „mysterious” than before. I liked many small details, such as the animation inside Queen Beryl’s crystal globe while she explains what the Silver Crystal is, and I liked that Usagi’s anxious, weepy nature is toned down while remaining a major character trait. It’s not very clear if Jedaite was killed at the end of the episode or if he just teleported himself away- if he survived, this would be „Crystal”‘s first major deviation from Naoko Takeuchi’s manga, where this is, indeed, his last appearance.
P.S. I am happy that this episode firmly points to Mamoru/Tuxedo Mask as a high school student only a couple years older than Usagi. In the 1992 anime, Mamoru was a university student, and Usagi was still 14, which made their romance more than just a bit disturbing, even though 5-year-old me didn’t pick up on it.