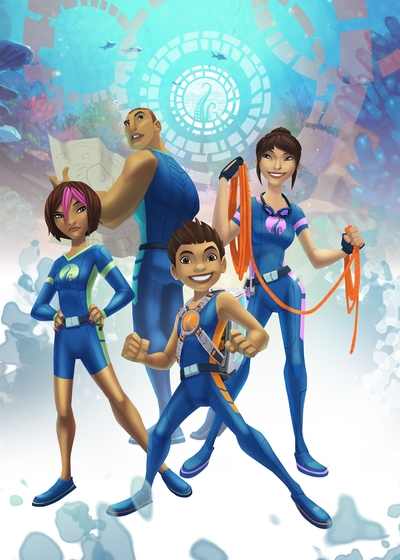 The Nektons – The DeepFrom left to right: The Nekton family – Fontaine, Will, Ant and Kaiko.
The Deep—a 26 half-hour episode series targeting kids 6 to 12 years old and their families—is based on the international hit graphic novel series created by multi-award-winning best-selling comic book author and playwright Tom Taylor (Batman: Legends of the Dark Knight, Injustice: Gods Among Us, Star Wars: Blood Ties), illustrated by James Brouwer (Justice League Beyond), and published by Gestalt Comics.Taylor will serve as head writer for the series, and Brouwer will serve as art director.

A Stark Production is handling pre-production and music for The Deep, including designs, scripts and storyboards; and Nerd Corps Entertainment is responsible for animation production—including voice talent, CG models and animation through final picture and sound.Technicolor is managing the global broadcast rollout of the series and developing brand extension licensing opportunities.

“The combined talents of A Stark Production and Nerd Corps Entertainment are a creative powerhouse capable of delivering a spectacular animated adventure series,” said Alison Warner, VP, IP Sales, Acquisitions and Co-Productions at Technicolor. “To have attracted such a high-caliber European broadcast partner as Super RTL speaks to the uniqueness of this incredibly imaginative project, and we are anticipating an enthusiastic response from potential television partners around the world when we meet with them at MIPJunior and MIPCOM.”

“The unique blend of undersea adventures, science and family dynamics makes The Deep a fantastic property, and we’re thrilled to be working with such great partners as A Stark Production and Technicolor,” said Asaph Fipke, CEO and founder of Nerd Corps.

“Nerd Corps Entertainment is the final piece of the puzzle that will catapult The Deep into the next vital stage of development and production,” added Avrill Stark, CEO & Executive Producer, A Stark Production.“With ABC and The Seven Network commissioning the series, we have incredible broadcast partners already in Australia, and with strong demand from the global market, it’s all systems go now.”

The Deep follows the incredible adventures of the Nekton family, underwater explorers comprised of the independent and fearless 12-year-old Antaeus (Ant); his analytical 15-year-old sister Fontaine, an astute navigator; and their parents Will, an oceanographer, and Kaiko, a marine biologist; and, of course… Ant’s pet fish! Continuing a long family legacy, the Nekton’s live aboard a state of the art submarine, the Aronnax, while exploring uncharted areas of the earth’s oceans to unravel the mysteries of the deep sea.

About Technicolor
Technicolor, a worldwide technology leader in the media and entertainment sector, is at the forefront of digital innovation. Our world-class research and innovation laboratories enable us to lead the market in delivering advanced video services to content creators and distributors. We also benefit from an extensive intellectual property portfolio focused on imaging and sound technologies, based on a thriving licensing business. Our commitment: supporting the delivery of exciting new experiences for consumers in theaters, homes and on-the-go. Euronext Paris: TCH  www.technicolor.com

About Nerd Corps Entertainment Inc.
Nerd Corps Entertainment is a privately held IP creation, development, production, and distribution company based out of Vancouver, Canada, with offices in Toronto, Canada. The company’s mandate is to produce stylistically innovative animated projects for television, online, and mobile based on a solid foundation of creative and exceptional storytelling. Working in a state-of-the-art studio with highly skilled artists and production staff, Nerd Corps’ expertise in creative development and execution covers all aspects of property generation and management, from development and production to distribution, marketing, interactive and licensing. The studio’s award-winning stable of productions includes original series Kate and Mim-Mim, Endangered Species, Slugterra, Storm Hawks, League of Super Evil and Rated A for Awesome, as well as Dragon Booster for Alliance Atlantis and Hot Wheels: Battle Force 5, Max Steel and Monster High for Mattel, Inc. Visit www.nerdcorps.com.

About A Stark Production
Established in 1998, A Stark Production (ASP) is a leader in the creative development of quality children’s animation and teams with global partners to deliver successful internationally co-produced shows. From its inception the company has been led by Avrill Stark, an independent and highly creative producer who has received many nominations and awards for outstanding animation including the prestigious UNICEF Award at Annecy, the Elan Award for Best Animated Television Production and three times nominated for the Australian Film Industry (AFI) Awards, to name a few.ASP prides itself on the development and production of shows that are diverse in appeal, ranging from series to feature films – pre-school through to the 8-12 market.Above all we make ‘having fun’ a priority in our pursuit of excellence!