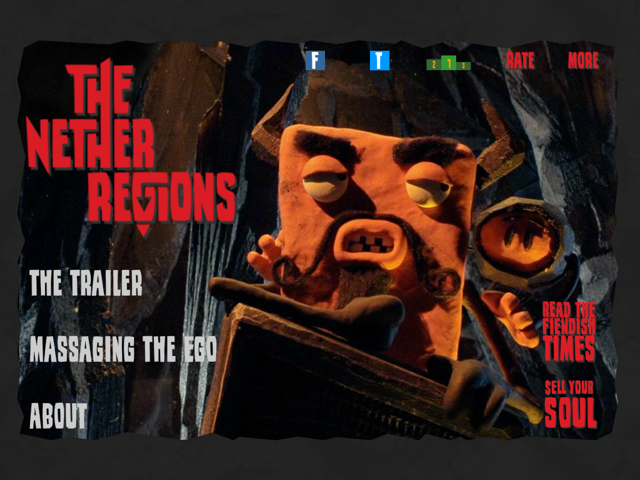 WÖNKY Films are proud to announce the release of their short film “The Nether Regions” online. The stop motion short film has been directed by Maria Lee and features the sonorous voice talents of the mighty Brian Blessed…

Wielding untold power at the helm of a vast and mighty realm may sound glamorous but no one tells you about the sleepless nights and the unrelenting stress, but that’s what the Devil must deal with on an eternal basis. Even in Hell, there’s no escape from bureaucracy but occasionally he does manage to slip away. With the most magical healing hands in all the nine circles of Hell and a sympathetic ear, it is Sven’s Massage Parlour to which the Devil makes his first port of call.

The release of The Nether Regions is another step in a busy few months for WONKY Films and their short films having released their fast paced short film Why Did The Chicken Cross The Road? online back in January, followed by Writers Block in April, which went on to rack up over 50,000 views and become a ‘Vimeo Staff Pick’ and was featured on Short of The Week.

As has become common place with the release of WONKY’s short films, they also have a companion iOS app for the short film. The app which is available for free via the Apple app store for both iPad, iPhone and iPod now contains the full film, a look behind the scenes with additional content including storyboards and animatics.

About WÖNKY Films
WÖNKY, are an award winning studio specialising in illustration and animation for broadcast, advertising and digital. WÖNKY work as a collective of creatives including illustrators, animators, musicians and writers to create content across a variety of media. Our passion is character animation and everyone at WÖNKY shares the same sense of humour that brings our characters to life.

About Maria Lee
Maria started out as an illustrator and graphic designer, working for many years in London on brands and packaging design. But her real dream was to make characters move and talk, so she returned to university to study animation and now works at Wonky Films in Bristol, doing what she loves best – drawing and animating and cycling, but not all at the same time.