Catarina and Diogo almost had something going on, but things never worked out; years later, they meet again in an airport. What will happen?

I saw Sara Barbas‘ animated short „Final Call„ at the Encounters festival in Bristol last year, and I was impressed with how it brings together playful antropomorphic visual with a smart, grown-up approach to a rom-com trope. Here’s an interview with Sara on the process behind the film, her work on Aardman projects and more:

How did you come up with the concept for Final Call?

Final Call is a love story inspired by a true event that happened to an old friend. I never forgot the feeling and the goosebumps that came over me when she told me how her and this young man missed out on a great opportunity when they were very much in love, all because of a small misunderstanding. Years later they realised this over a coffee, but it was too late. I wanted to explore that “might have been” feeling, the missed opportunity. I had also been mulling over an idea of making a film with anthropomorphic animals as players in a realistic world, and the very familiar setting of the airport.

What is the significance of the airport, a space of continuous transit, as a background for the story?

As a frequent traveller, I have spent many long hours in the clinical environments that are airports. I have queued endlessly and gone through security countless times. For this, I’ve always wanted to use the setting of an airport for a film – a place of transition, of arrival, of departure. In particular the security check – where you have to go through an almost humiliating process of X-raying your belongings, taking off coats, scarves, boots, getting laptops out, of almost feeling like you have done something wrong.

More often than not, when old flames appear in stories, it’s to rekindle the relationship between the characters. In your film, Catarina decides to move on, which I found to be a refreshing and mature take on the trope. Why did you decide on this ending for the story?

‘Moving on’ was the driving force of this film. It was what Catarina needed, even though she didn’t know it. She needed to leave her emotional baggage behind and move on with her life. The ending changed many times during the development stage – we had lots of producers from different countries involved and interested in making the film and each one had their creative input. In the end I returned to the original idea because that was part of the essence of the story I needed to tell. My producer, Humberto Santana, also agreed.

I really loved the humour stemming from visual gags and the diverse animal population in the airport. How were the different animals chosen for different characters – why is Catarina a cat, Diogo a dog, the different airport workers, racoons and turtles etc.?

Although these anthropomorphic characters behave mostly like humans, I tried to include gestures and movement that pertain to their animal nature. Doing so I could highlight certain aspects of the story, the theme and their personalities. Each choice of animal was a conscious one, for each species has universal archetypal and behavioural connotations. The two main characters – the cat and the dog – will never see eye to eye. They are both very intelligent and strong, but in very different ways. The cat is independent, owner of her fate, feminine. The dog is loyal, friendly, charismatic and (too) pragmatic. The secondary characters not only create tension and help with the rhythm and timing of the story, but they also add some very needed comic relief to this unlikely re-encounter.

Tell us a bit about the choices made when developing the look and the visual style of the film, the character design etc.

I began to develop the visual style when I did the Open Workshop artistic residency at The Animation Workshop in Denmark. Magnus Møller and I came up with the early character designs by drawing and re-drawing on top of each other’s designs at the communal kitchen table. It was so much fun. I had a lot of references and ideas and we started to build on these.

Background design has never been my forte, so I involved Ricardo Cabral and Marie Jørgensen in the making of some early studies. Henrik Sønniksen gave the characters their first colours. Mads Juul took the character design further by making the storyboard and animatics and when we finally secured funding and began production Anne Hoberg Overgård, Anne Birk Petersen and Ricardo Tércio took the character design and art direction to yet another level. It was all the fruit of a lot of teamwork, much experimentation, a lot of talent bringing in their finest skills and uniqueness.

The work showcased on your website includes 2D animation, stop-motion and live-action. How do these different media influence the process of writing and developing a story?

With animation you have a lot of freedom because you can create a completely imaginary world. In 2D there are absolutely no boundaries (except for budgetary ones!). In stop-motion you need to think of the feasibility of the actions and characters. They need to move in a physical world, you need to think of gravity, camera angles, where the set ends, how many puppets and sets you will have available. All these technical aspects need to be taken into consideration very early in the development and writing stages. In live action the actors bring a lot of themselves into the characters and onto the set. They build on the characters you wrote. They interpret them and make them grow in front of the camera. It’s a lot of fun.

What are the main differences between working on an “author” project like Final Call, and a big studio franchise such as Shaun the Sheep? What are the pros and cons for each?

I love them both. Working for a big studio on a big renowned project is terribly exciting. I remember pinching myself on a daily basis when working on the ‘Wallace and Gromit’ feature. You are surrounded by the most talented people in the world who have years of experience in a huge studio with all the resources and facilities. Everyone is working incredibly hard for a common goal and the team spirit is amazing. Some say the disadvantage is that you are a small cog in a big machine. Because the projects are so huge, every role is very specialised and you have less creative freedom. As an author you have all the creative freedom; your project is your baby and you tell the stories that are burning inside you. Getting projects funded and made as an author is a bit of a struggle, however. It took me five and a half years to secure funding and co-production deals to make ‘Final Call’. It’s great if you can get the right balance between the two.

What made you choose animation as a field of work?

I was always passionate about animation. As a child, not only was I completely engrossed in the stories. but I would also try and dissect how they had made the drawings or puppets move from a very early age. I’d feel cheated if loops were used in 2D shows and would stare at the puppets trying to figure out how they pulled it off.

Animation wasn’t really a career option in Portugal in the 90’s, so even though I made a lot of experiments at home I chose to do a degree in Fine Arts -Sculpture. It just so happened that an animation studio put an advert up in my university and I followed it up. It was Animanostra. They offered me my first internship when I just turned 19 and it was with them that I made ‘Final Call’ 19 years later.

What’s your next project?

I have another dream of making a children’s picture book. I will play with the simplicity of the words and the (screenprinted) imagery. Possibly make it a bilingual project. But it’s very early days. 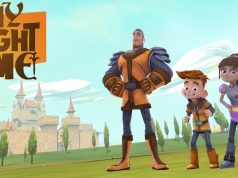