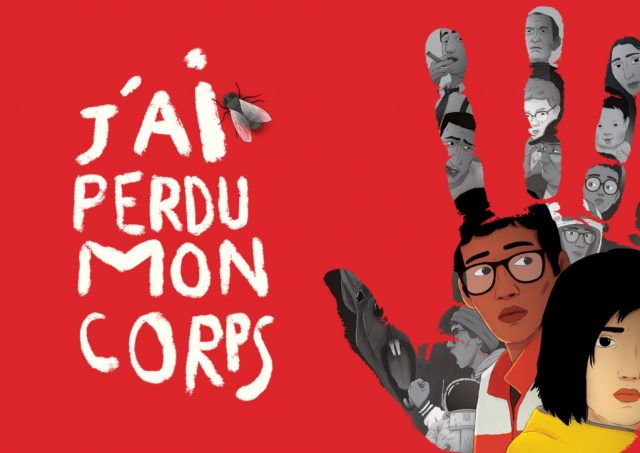 Does fate actually exist? Is our destination decided for us before we even embark upon the journey? And if it is, can we decide to deviate from the script?

These philosophical musings are not necessarily what you’d expect to get from a film about a dismembered hand looking for the rest of its body, but from what I’ve seen in animation festivals along the years, Jeremy Clapin has a history of blending body horror or weirdness with unexpected emotional depth. In his 2006 short animation „Une histoire vertebrale”, a man with a physical deformity is looking to love a woman with a different but complementary condition; in 2008’s „Skhizein”, the protagonist finds himself moved 91 cm away from physical reality by a meteorite strike and must re-evaluate his entire life.

„I Lost My Body” is Clapin’s feature debut, and it’s a strange beast; I’m still not sure how I feel about it more than a week after seeing it at the 2019 BFI Film Festival in London. Half of it is a fun, macabre picaresque narrative exploring Paris from the point of view of a sentient body part; the other half is the more conventional slice-of-life drama of a lonely young man. It seems inevitable that the stories will converge, and they do, in a gruesome, edge-of-the-seat scene. Still, the fact that we can see it coming does not provide us with a clear-cut (pardon the pun) ending nor with any easy answers.

Naoufel, our (complete human) protagonist, is a pizza delivery boy with a precarious existence and a background of great personal loss. He has every reason to see himself as unlucky, but he’s also determined to keep some agency in his own story. When a failed delivery results in a tentative connection with intended customer Gabrielle, Naoufel decides to do everything in his power to turn this chance encounter into a romance. A less charitable reading of his behaviour would paint him as a stalker, but Clapin isn’t interested in exploring that angle. Instead, we see how even the smallest of decisions pile up like grains of sand to bring our hero to his fate-or could he have done anything differently to change the outcome?

Naoufel has his own ideas about that: destiny exists, he says, but you can briefly sidestep it if you do something shocking enough, and then who knows what will happen afterwards? We know early on that the protagonist will lose his hand, but that’s not the whole story, not for him and not for the hand. Naoufel himself is not much of a character, and the other characters – except for his hand!- are completely one-dimensional (Gabrielle is a fairly standard Manic Pixie Dream Girl), but that somehow seems inessential to the film, which manages to be more than the sum of its parts and make a strong impression.

In the end, „I Lost My Body” is a more of a meditative, melancholic mood piece than a story. The visual style, mixing hand-drawn animation with CGI, is reminiscent of a graphic novel, but the real star is the soundtrack, which would probably be worth listening to on its own. The characters spend a lot of time on roofs, contemplating the city below, and the film takes you there with them: looking in at humans and their weird journeys, taking a momentary escape, or a step sideways, from whatever the Big Plan has in store for you, too.