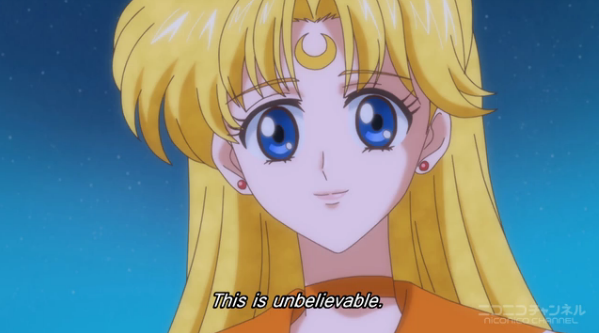 I know that magical girl series are a genre in itself, but if we were to apply Western media genres, the 90’s Sailor Moon anime would be a superhero story, and its main theme was friendship (between girls), with various elements from other genres: romance, fantasy, sci-fi etc. Well, „Sailor Moon Crystal” is by now pretty obviously romance, genre-wise, and everything else – friendship, fantasy elements, superhero stuff- is secondary. Mamoru/Tuxedo Mask is a much more prominent character already than he ever was in the old show, and every episode so far has contained massive amounts of Usagi/Moon just swooning over him, to the detriment of other aspects of the story. I can’t say that I’m very happy about this, given that the romance aspects were never my favourite part of „Sailor Moon”. By now, though, I have already made peace with the thought that „Crystal” will probably Not be my favourite incarnation of the franchise.

I had to start with that because even though this week’s episode is called „Minako-Sailor V”, there is definitely more screen time for Usagi+Mamoru=LOVE in it than for Minako in her introductory episode, which had not been the case with the other girls. I can’t help but think that Minako is being more than a bit shortchanged here, and by gum, the show would do well to make it up to her in later episodes, because Minako is probably the most important of the Senshi, after Sailor Moon.

This isn’t to say that what we do have on V here isn’t good. She is being looked up to like a superstar by the other girls, and no wonder: not only does she make her entrance by saving everyone from Zoisite (with a bit of help from her brave cat Artemis), but she also introduces herself as the Princess they had been looking for. Not to mention that Minako is, in fact, an actual superstar: photos of her as Sailor V are plastered all over town. Usagi in particular is very star-struck: from now on, she will work with her favourite celebrity! All the girls pledge their loyalty to Minako immediately and seem very impressed by her confidence. She is more experienced as a Sailor Senshi, she has more information on the enemy AND she is the Princess- it makes sense for them to admire her and instantly accept her as a leader, because Minako has already proven herself to be objectively awesome.

Minako herself doesn’t appear to think much of her new allies: she is nice to them but distant; she tells them what’s going on and then she goes back to whatever she was doing before she met them (and, erm, saved them). This is an important difference between her introduction and that of the other girls: Usagi was scared and reluctant to become a Senshi; Ami, Rei and Makoto seemed more interested in Usagi’s friendship than the new job itself. If Minako was ever scared to accept risk and responsibility, we don’t get to see it: by the time she steps into the scene, she has already become a no-nonsense warrior, and she doesn’t cling on to the company of the other girls at all.

This almost becomes her undoing quite quickly. Queen Beryl (who is continuouslywatching the Senshi through some sort of magical CCTV connected to her HD crystal globe, which I find very amusing) appoints Kunzite as the new Manager of Evildoing. He puts the entire population of Tokyo into an energy-draining coma (this is happening very often, I must say- having Sailor Senshi and their opponents in one’s town is quite the health hazard) and asks Minako to give him the Silver Crystal, or else. She decides to go meet him and fight him alone, and hints at a non-evil identity that he used to have and that she knows well. It’s not the first time „Crystal” suggests that Beryl’s minions and the Senshi know each other, and I’m curious to see where they’re going with this. In any case, after V saved the other girls earlier in the episode, they now drop by just in time to save and support her, and also to give her a little pep talk on the advantages of friendship and working together.

Still, even with their joined efforts, Kunzite is not defeated in this episode, which ends with Tuxedo Mask being blasted while trying to defend Sailor Moon. Another cliffhanger! I appreciate Mamoru/Tuxedo Mask’s efforts, I really do, but in the end, as he himself admitted earlier in the series, he really does not have any superpowers, and every time he interferes with a battle of the Senshi, he’s just one more thing for Usagi to worry about. I mean, he does catch Moon after she falls in this episode, but then again the Senshi were shown only a few minutes earlier as able to fly when they want to, so did she really need him? No, if you ask me, Mamoru should just stay out of it, instead of constantly putting himself in danger.

We’ll find out how things turn out for him on the first of November.