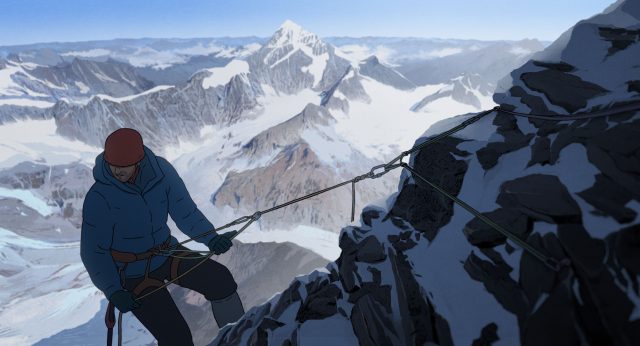 Netflix’s new animated release “The Summit of the Gods” is an old-fashioned film, and I say this entirely as a compliment. The protagonists are tough men of few words who pursue their passions obsessively. There are rivalries, tragedies, blind ambition, an historical mystery, literal cliff-hangers. And it all looks like an old-school adventure graphic novel.

Based on a manga by Jiro Taniguchi, the story follows Fukumachi, a photographer looking for the camera of legendary (real-life) British climber George Mallory, who died on mount Everest in 1924 during a summit attempt. Fukumachi’s quest brings him on the trail of Habu, another legendary (fictional) climber getting ready to climb Everest himself, and planning to take a particularly tricky route.

Mallory’s camera and the mystery that surrounds it are mostly a red herring: through the character of Habu, the film is primarily interested in what motivates daredevil mountaineers. What can drive someone to pursue such a strenuous and dangerous activity, often at the detriment of everything else in their lives? Are they purely individualistic and seeking personal glory, or are they capable of selflessness in moments of crisis? How do they cope with losing friends and climbing partners in the kind of accidents that happen too often in mountaineering?

“The Summit of the Gods” is not reinventing the wheel in its approach to any of these questions, or to narrative techniques in general. Its tropes will ring a bell to anyone who is familiar with other stories and accounts by or about mountaineers, such as Jon Krakauer’s bestseller “Into Thin Air”. It is, however, remarkably effective and tense. The film is every bit as exciting and impactful as any documentary on mountain climbing, and its straightforward plotting comes off as elegant rather than simple.

More than anything, this is a beautiful film, and I felt a bit sad that I was watching it via streaming at home, rather than on a big cinema screen. Natural landscapes are glorious and terrifying, while the human world is sharp, bright, colourful and full of quirky 1990’s details. The look of the film recalls the Franco-Belgian adventure comics that those of us who grew up in mainland Europe remember very well from our childhood (indeed, from what I understand, Taniguchi’s manga itself is heavily influenced by French language graphic novels, and the author is very popular on the European comics market).

All in all, this is the animated Everest story you didn’t even know you needed in your life.